Primum Non Nocere–First do no harm. These words from Hippocrates are as true today as when they were first uttered many years ago. This saying provides appropriate backdrop as we consider an area of recent increased interest:  statin medications and the incidence of new onset diabetes.

Primary care physicians must work to get diabetic patients to achieve multiple clinical goals. Glycemic, blood pressure, and lipid targets keep the physician and patient constantly engaged in a complicated dance of lifestyle and medication management with a dizzying array of societal forces working against them. Recent data suggest that one of our favorite dance partners, statin medications, may be bringing some untoward and previously unrecognized adverse effects to the party. With the power of the internet, blogs (such as this), and social media, confusion exists and misinformation abounds regarding real and theoretic risks, complicating the once easy decision making process of starting the statin class of medications. Throw into the mix the recent FDA warnings of increased myositis with higher dose simvistatin that received much public and medical community attention and the worry about potential pushback from patients (and clinicians), and the resultant underuse of this vital medication becomes a real possibility.
So what’s the real deal with statins–and what does the beta cell got to do with it?
First one needs to know that all statins affect the beta cell to a different degree depending on their particular lipholicity. Going to the basic science one can see that in a mouse model[1] pravastatin (less lipophilic), and simvistatin and atorvastatin (more lipophilic) all had different effects. In particular, at low glucose concentrations cells that were bathed in the lipophilic simvistatin and atorvastatin had unexpectedly high basal insulin secretion while at high glucose levels insulin secretion was apparently decreased statins, suggesting dysregulation. Furthermore, after incubation for 48 hours, impaired cell viability as estimated by MTT assays was found to a greater extent with simvistatin and atorvastatin than with pravistatin.   It is felt that HMGCo-A inhibition or cytotoxicity by lipophilic statins was the cause of insulin impairment in these mice islets.
Other studies suggest that all statins, to the extent that they lower LDL and/or raising HDL, might have discrepant effects on beta cells. For example, another study[2] suggested the potential negative effect of reduction of LDL by statins. In this study, von Eckardetein et al. found that LDL inhibits glucose-stimulated insulin secretion and proliferation of beta cells by LDL-receptor dependent and independent mechanisms. They also reviewed the effect of elevated HDL in inhibiting apoptosis of beta cells.   Also affected by HDL and LDL concentrations are the formation of insulin granules and exocytosis processes in the beta cell.
Moving closer to the clinical arena Mita et al.[3]  found a preferable effect of pravastatin over atorvastatin on beta cell function in early type 2 diabetes. In their 12-week open-label prospective cross-over study of patients with early-state type 2 diabetes mellitus and hypercholesterolemia, they found significantly lower HbA(1c) and 2 h-glucose levels during oral glucose tolerance tests (OGTTs), as well as a significantly higher disposition index, after pravastatin treatment, suggesting that pravastatin has a favorable effect on pancreatic beta cell function compared to atorvastatin.
Clearly there seems to something going on with glycemic control due to the statin effect! So let’s get more clinical data. In 2009 Rajpathak et al.[4] performed a meta -analysis of statin therapy and the risk of developing type 2 diabetes. When incorporating the LIPID, HPS, ASCOT, JUPITER and CORONA trials (see chart, below) into their analysis they found a small increase in diabetes risk (RR 1.13 [95% CI 1.03-1.23]) When WOSCOPS (the West of Scotland Coronary Prevention Study) was included the risk was attenuated (1.06 [0.93-1.25]), but study heterogeneity increased (a potential weakness of adding that study into the analysis). All in all, the study was intriguing but not overly worrisome. 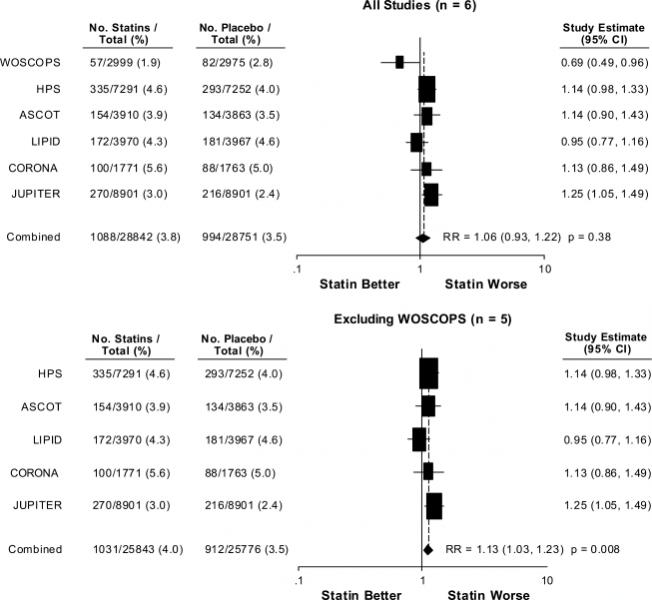 More recently, Sattar et al.[5]  analyzed 13 statins trials with over 90 thousand participants. Diabetes developed in 4275 patients (2226 assigned statins and 2052 assigned control treatment) over an average of four years. The risk was highest in older patients. The authors found that 255 patients needed to be treated for four years with a statin to lead to one extra case of diabetes—a low but real increased risk!
And finally an important new study has further defined the risk of diabetes due to statin medications.[6] This meta analysis performed by Preiss et al. included five statin trials and included over 32 thousand participants. Over a 4.9 year period 2749 patients developed diabetes. Of these patients, 1449 had received intensive dose statin therapy and 1300 moderate dose therapy. There were 3134 cardiovascular events in the intensively treated group and 2550 in the moderate statin dose group.   The odds ratio for new onset diabetes was calculated to be 1.12 (95% confidence interval [CI], 1.04-1.22 and was 0.84 (95% CI, 0.75-0.94) for cardiovascular risk. The authors concluded that 498 patients would need to be treated intensively to develop one extra case of diabetes and 155 patients treated intensively to prevent a cardiovascular event. In commentary, Sampson et al.[7] acknowledge the low increased risk of diabetes associated with statins but write:
…the underlying mechanisms for this association remain unclear. Experimental evidence supports a paradigm implicating inhibition of β-cell glucose transporters, delayed ATP production, pro-inflammatory and oxidative β-cell effects of plasma-derived cholesterol, inhibition of calcium channel-dependent insulin secretion, and β-cell apoptosis.
So in the end, thankfully, the increased risk of diabetes (or for that matter worsening diabetes control) is smaller than the overall net benefit in hard important cardiovascular outcomes. We have some inklings as to the putative mechanisms as to the adverse statin effect on the beta cell, but stay tuned as future research will provide additional clarity. For now, go for goal, and get your LDLs down below 100 mg/dl (or for those with coronary disease 70mg/dl). The benefit is clear…. Just remember to monitor the sugars!
References:
[1] Ishikawa M et al. Distinct effects of pravastatin, atorvastatin, and simvastatin on insulin secretion from a beta-cell line, MIN6 cells. J Atheroscler Thromb..2006 Dec;13(6):329-335.
[2]von Eckardstin A, Sibler RA. Possible contributions of lipoproteins and cholesterol to the pathogenesis of diabetes mellitus type 2. Curr Opin Lipidol.. 2011 Feb;22(1):26-32.
[3]Mita T et al. Preferable effect of pravastatin compared to atorvastatin on beta cell function in Japanese early-state type 2 diabetes with hypercholesterolemia. Endocr J. 2007 Jun;54(3):441-447.
[4]Rajpathak et al. Statin therapy and risk of developing type 2 diabetes: a meta-analysis..Diabetes Care.2009 Oct;32(10):1924-1929.
[5] Sattar N. Statins and risk of incident diabetes: a collaborative meta-analysis of randomized statin trials. Lancet 2010 Feb 27;375(9716):735-742.
[6] Preiss D, et al. Risk of incident diabetes with intensive-dose compared with moderate-dose statin therapy: a meta-analysis.  JAMA. 2011 Jun 22;305(24):2556-2564.
[7] Sampson UK, Linton MF, Fazio S. Are statins diabetogenic? Curr Opin Cardiolol. 2011 Jul;26(4):342-347.

More Posts by this Author