The future of diabetes may be restoring beta-cell differentiation as opposed to promoting insulin production, says award-winning researcher at the 2014 ICE/ENDO conference in Chicago.

The joint meeting of the International Society of Endocrinology and the Endocrine Society – ICE/ENDO – in Chicago, Illinois wraps up today, Tuesday, June 24.

The conference featured prominent discussions surrounding beta cells in type 2 diabetes, notably the Michaela Diamant Memorial Symposium on Beta Cell Failure in Type 2 Diabetes, chaired by Kenneth Polonsky, MD, and the Edwin B. Astwood Award lecture by recipient Domenico Accili, MD, on the dedifferentiation, rather than the death, of pancreatic beta cells in T2DM disease progression.

The Memorial Symposium featured presentations on genetic predisposition to, the foundation of, and the natural history progression of beta cell failure in T2DM.

“One doesn’t get diabetes without beta-cell failure,” said Christopher Rhodes, BSc, PhD, Professor, Department of Medicine, Section of Endocrinology, Diabetes, and Metabolism at the University of Chicago. Rhodes pointed out the seven foundations of beta-cell susceptibility:

1. Human beta cells are designed to protect us from starvation, not to manage overabundance of nutrition.

2. Susceptibility to beta-cell failure and development of T2DM are genetic and inherited.

3. Environment can trigger beta-cell failure including diet, sedentary lifestyles, and exposure to various chemicals such as pesticides, food additives, endocrine disrupters, and more.

4. Baseline beta-cell mass, which is mostly developed during the neonatal phase of life.

6. The adaptive plasticity for (pro)insulin production

These foundations, along with other findings, were summarized in this figure, “Stressors on the β-Cell in the pathogenesis of T2D,” from β-cell Failure in Type 2 Diabetes: Postulated Mechanisms and Prospects for Prevention and Treatment[i], published jointly in the Journal of Clinical Endocrinology and Metabolism and in Diabetes Care: 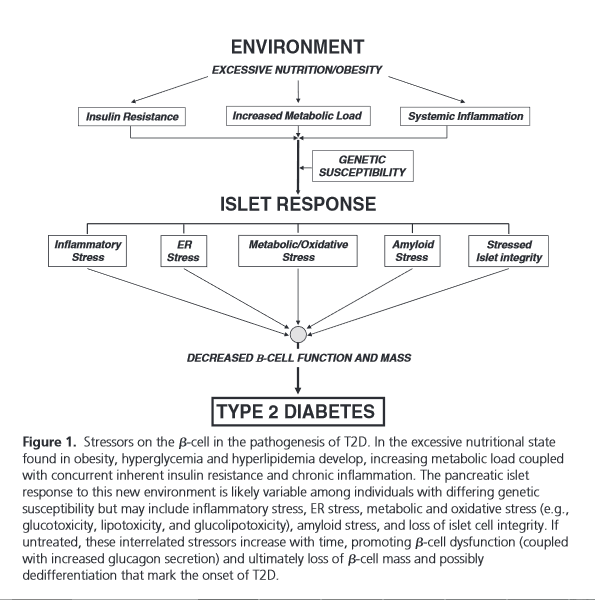 Polonsky, Dean, of the Pritzker School of Medicine at the University of Chicago, began the Sunday morning symposium from the Global Partnership to Accelerate Diabetes Research, with a short tribute to Dr. Diamant, who died April 9, 2014 from cancer at the age of 51.

Diamant led the diabetes and endocrinology department at the VU University Medical Center in Amsterdam. She served on the advisory board for Medscape Diabetes & Endocrinology. She was awarded a fellowship in the Royal College of Physicians (Edinburgh) in 2011 and was a member of the Dutch Diabetes Research Association, the European Association for the Study of Diabetes (EASD), and the American Diabetes Association (ADA). She was associate editor for Diabetologia from 2005 to 2009 and continued on the advisory board from 2010 to 2011.[ii]

She was a gifted mentor and outstanding speaker, Polonsky said. “She will be sorely missed.”

Accili, Russell Berrie Foundation Professor of Diabetes at Columbia University in New York City, won this year’s Astwood Award and presented his lecture Sunday morning explaining key findings from his lab that the beta cells in humans with T2DM do not die with disease progression, but dedifferentiate to alpha cells.

“As diabetes progresses, dedifferentiation, rather than apoptosis, is the main underlying cause of beta-cell failure. Our data, and data from others, suggest that dedifferentiated beta cells can become non-beta cells, primarily alpha cells, and that this process is set in motion through the loss of metabolic flexibility,” Accili said.

Two things happen to beta cells as a person’s T2DM progresses from slightly to severely hyperglycemic –the beta cells undergo metabolic changes that cause “metabolic inflexibility,” which means that the beta cells can no longer switch from glucose to lipids as an energy source when needed. That inflexibility is the “bellweather” of an increase in beta-cell mass brought about by dedifferentiation.[iii]

The take-home message for diabetes therapy and the development of new therapies, Accili said, is to “restore beta-cell differentiation as opposed to promoting insulin production in the treatment of type 2 diabetes.” Accili hopes to achieve this in the lab in the next few years.